Militarization of space and the preemptive suppression of crowds. Checkpoints, helicopters, tanks, and guns. The blanket criminalization of public expression and the demonizing of all who seek to resist the rise of fascism. These are the tools of the democratic state in response to the fracturing of society. Street-level fascists are dangerous, but the escalation of state control and police violence fulfills their program on a much larger scale.

In Newnan, Georgia on April 21, 2018, seven hundred officers from 42 city, state, and federal jurisdictions mobilized to encircle and attack the anti-fascist demonstrators gathered to oppose the National Socialist Movement. We were vastly overpowered. We need to reflect on this experience and draw conclusions about how to prepare for the next round, which will not pit us against rag-tag Nazis but against the full force of the state itself.

To support the ongoing legal defense of antiracists arrested in Newnan, donate to the Atlanta Solidarity Fund. You can read a reportback from the anti-fascist mobilization in Newnan here.

A Strategy of Tension

We have some experience with policing. We saw the cowardice of officers in Charlottseville and the precise targeting of the black bloc at Auburn; we laughed at the bumbling state troopers in Stone Mountain and took notes on the way they carried out surveillance from the rooftops of Gainesville. We study the enemy. We have compared our experiences in the streets of Harrisburg, Shelbyville, Pikeville, Murfeesboro, Knoxville, and beyond. Newnan was different.

When a humble crowd of anti-racists began to assemble in downtown Newnan, camouflaged police attacked us brandishing high-powered rifles. The immediate and sustained use of preemptive force from the very start irreparably impacted our collective ability to act with initiative and assurance. Police punched us with closed fists, struck us with assault rifles and tazers, and indiscriminately snatched protesters off sidewalks. They targeted masked protesters, teenagers, mainstream journalists, parents scrambling for their children, legal observers, and peace activists. The police used every snatch-and-grab as an excuse to kettle and divide the crowd. What would have been a 300-person march became two groups of 150, then four groups of 75.

Throughout the day, anti-racists attempted to outmaneuver the police by abandoning the militarized streets for the less governable train tracks and forests. Despite being more fluid than our opposition, we were unable to break even thinly protected barricades at the weakest points in their perimeter. This was partly because our morale was crippled by the constant pressure of having guns pointed in our faces and partly because state reinforcements always arrived at the exact moment the crowd reached consensus to do something. We were in a constant state of attrition. Hours spent backtracking through hostile side streets under the hot Georgia sun further damaged our confidence.

To say that the police were equipped for a riot is an understatement. They were ready for civil war. Our scouts reported that traditional hard-shell riot cops were protecting Nazis from the protesters in the sanctioned “free speech pit,” but we never saw them. We saw an army. Deputized officers wearing Kevlar vests over army fatigues armed with 5.56 millimeter assault rifles flanked us on both sides. The ground trembled beneath the BearCats and tanks rolling down the streets, surplus weaponry from the War in Iraq; drones circled above us. Mobile squadrons were assigned to tail groups of protesters every time the march splintered—which occurred frequently and never of our own volition.

Over the last 20 years, we’ve seen similar displays of militarized force in response to the large-scale uprisings of black and native rebels in Ferguson and Standing Rock and occasionally at anti-globalization protests such as the G20, but we did not anticipate this level of militarization in the sleepy Atlanta suburbs. We understand this escalation of tensions as an experiment in crowd control strategy likely mandated by frantic federal authorities and exacerbated by small-town cops playing dress-up as soldiers.

The New Horizon of Repression

When the velocity of our movements outpaces the official script of democracy, the state is forced to fall back on its core principle: overwhelming force. The crude cost-benefit analysis of the authorities is that it is better to risk the political legitimacy of the police by brutalizing protestors than it is to risk the possibility that people will chart their own paths in a way that calls governance itself into question. In Iraq as in Newnan, in the beginning and in the end, democracy is a military occupation.

It seems telling that the police gave no official statements before the rally despite a whirlwind of news coverage: they offered no platitudes about “free speech” and made no excuses about “protecting the public.” There were no community relations officers negotiating with token collaborators. There was practically no discourse whatsoever, only planning. Only afterwards did the local media sluggishly offer a perfunctory narrative justifying the brutality of the police.

The traumatic convulsions of the Left in response to Trump’s election afforded us a brief window of legitimacy: for a few months, no statist narrative could explain the sudden fracturing of society, and those who wished to resist the sudden ascendancy of far-right politics were compelled to join anarchists in the streets. Newnan shows us that that window has closed. After a year of clashes in which masked anti-fascists fought police and built burning barricades while neo-fascists shot, stabbed, and ran over protesters, liberals and conservatives alike are spreading a discourse promoting a symmetrical fear of all sorts of “extremism.” The function of this discourse is to open the way for the police state to arise in its full force.

Our generation saw the racist terror that underpins this country baptized with blood on the streets of Ferguson and confirmed in the horrific aftermath of Charlottesville. The trauma of the American Experience will not heal in our lifetimes, but we deeply cherish the cross-racial unity we’ve felt in the streets when we have directly confronted the forces of segregation. These brief moments of shared courage, care, and dignity across racial lines are worth a century of symbolic progress. It is precisely this autonomous collective power that the state cannot allow.

As the momentum of fascist organizing wanes, “antifa” has become public threat #1. Their fusion centers show their determination to fix us in their sights. The boundaries of legitimate politics are always in flux, but the need for control remains constant. The story that the government’s hired guns escorted freedom marchers on the road to Montgomery will never redeem them for the brutality they enacted in Selma. It is no great irony that the mask laws used against anti-racists in Newnan were originally intended for use against the Ku Klux Klan. Governance has no commitment to ideals. Beneath all levels of abstraction, there is only the callous organization of violence.

The Defeat of “Antifa,” the Victory of Anti-Fascism

The battles we have fought in the last few years prepared us for the extremity of these events. Despite all the setbacks, it is heartening that two dozen Nazis now require a million-dollar Pentagon budget and a 700-man military convoy to conduct their rallies. Neither the empty posturing of politicians nor the hollow point rounds of police forced white nationalists back into their corner; it was the determination of anti-fascists and the bravery of ordinary people. We have won the respect of our generation, while the Nazis have lost their respect.

Fighting the NSM (National Socialist Movement) ten years ago, there were fifteen of us and sixty-five of them. Now they are two dozen, and we are hundreds, thousands. We made efficient use of the temporary sympathy of the national media and we broke the wills of the up-and-coming white nationalist leaders. We forced the alt-right to either hide their politics in shame or to publicly adopt more and more marginalized ideologies. They raise their swastikas on rural compounds owned by decaying relics of the old Klan days because they cannot do so anywhere else.

We should take this opportunity to recall our vision of another world. We have never accepted the narrative of our struggle created by Fox News and CNN; our stories are ours alone to compose. In the battles ahead, as we face a rapidly militarizing state, this vision will be the most powerful weapon we have. We must refine it and make it clear for all to see. The alternative to fascism is not a militarized society oppressed by total police control—that is simply the realization of fascism by another means. The alternative to fascism is community autonomy and self-defense. We should focus on meeting the immediate needs of the people in our neighborhoods, developing ties of mutual aid and defense so strong that neither Nazis nor police nor gentrifying tech companies can determine what happens in them.

The fact that the Nazis can no longer build their capacity through public rallies without an army protecting them does not mean that our communities are safe. History teaches that the public humiliation we’ve inflicted on white supremacists will drive them to resort to more violent attacks. We must build models of anti-fascist organizing that prepare us for their ongoing transition toward underground right-wing terrorism.

While the presence of armed comrades in Newnan increased our relative safety, further militarization on our side would be an error at this point. It would not be strategic to engage the Blue Lives Matter psychopaths pointing AR-15s from their porches in a symmetrical conflict on their preferred terrain. It would be better to turn their children against them, so they grow old and die reviled by the generations that will succeed them. Guns may be necessary in certain situations, but our strength is ultimately social, not military.

We feel secure knowing that our neighbors have our backs and that our self-defense skills have sustained us through this dark time. The networks we have built between medics and gangs, lawyers and elders, are stronger than ever. At each stage of this conflict, our experience in the streets has refined our strategic acumen and deepened the trust we share. We are not ashamed to lose a battle. We are vindicated by the brave solidarity demonstrated by comrades from across the South and beyond.

As long as there are crosses burning we will have our cross to bear. We stand by the old hypothesis that our greatest achievements are not the victories against fascists when they are big, but our victories over them when they are small. Now we have to gird ourselves for the battles ahead, in which we have to delegitimize the police and persuade a critical mass from society at large to join us in pushing back against their control.

Bruised but not shaken. 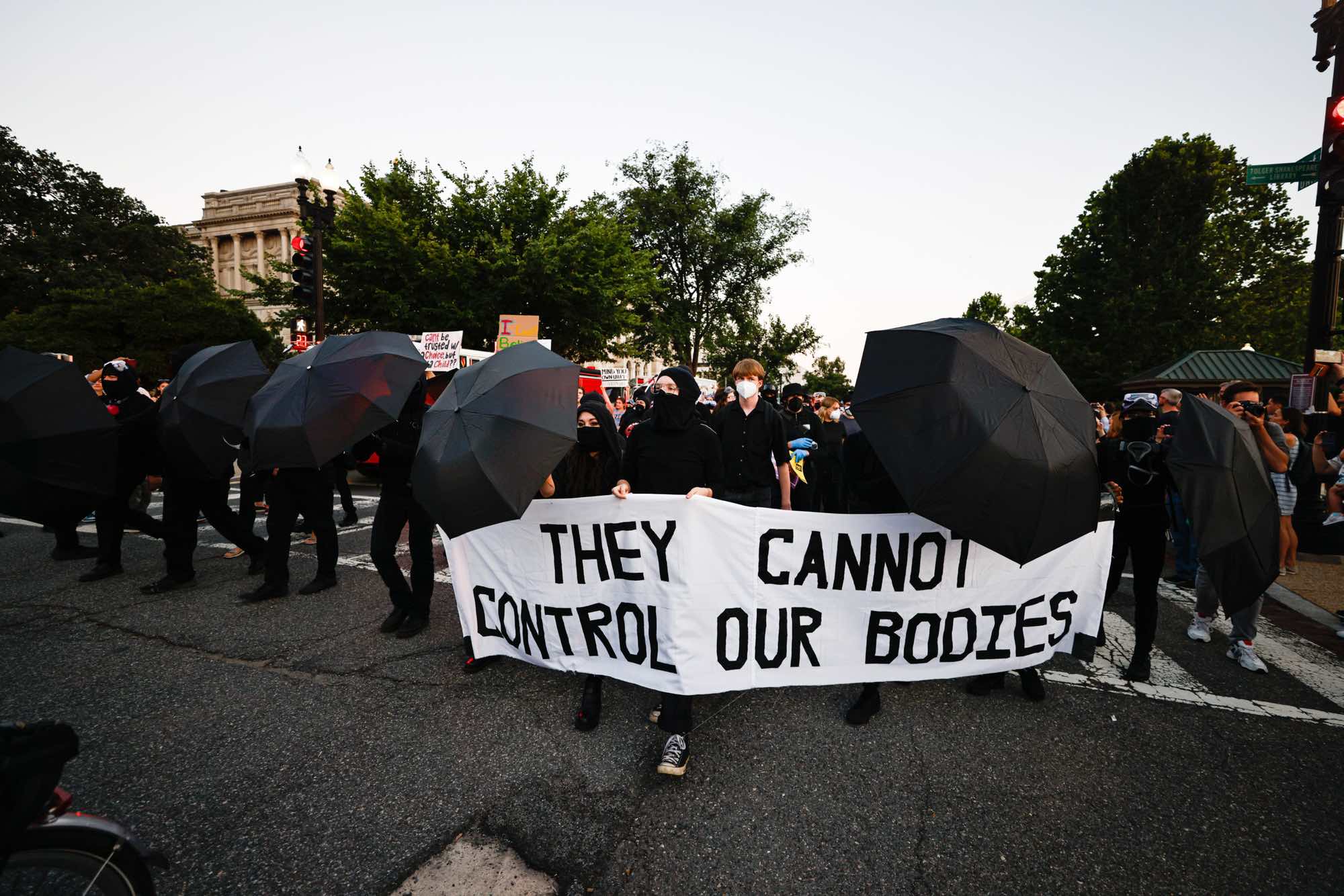